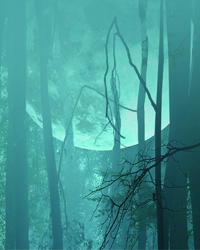 Supported by the Columbia Basin Trust and Columbia Kootenay Cultural Alliance, Quintessence is a fully staged, multi-media production, which includes originally composed music, dance, and projections woven together in a story of the path through isolation and adversity that eventually leads back to connection and community.

In this journey, the Hero is forced to confront the reality of climate change, political divisiveness, lack of tolerance and the subsequent loss of hope.

“Although the subject matter sounds pretty heavy, the message is one of our connection to nature and each other,” says Girvan. “The music and poetry are filled with wonder. Ultimately, this is designed to stir the kind of hope that inspires each of us to action.”

Helping to bring that inspiration to life is Lalin Vocal Ensemble who represents both conflict and ancestral alliance for the protaganist. Acclaimed actor-dancer-choreographer, Hiromoto Ida will take the role of the Hero, and Hope will be performed by the show’s creator, Allison Girvan. The original score is written in collaboration with award-winning Nelson composer, Don Macdonald.

Rounding out this stellar creative team is choreographer Slava Doval who, along with Ida are also past recipients of the title of Nelson’s Official Cultural Ambassador.

The original text for Quintessence is in English, as well as sections in French, Ewe (an African language translated by Nelson local, Clementine Segbeaya), Persian, Japanese and Spanish.

“At a time when many seem determined to divide, this is a reminder that no matter what language we speak, there are universal themes which unite us all.” – Allison Girvan

The Art of Chamber Music