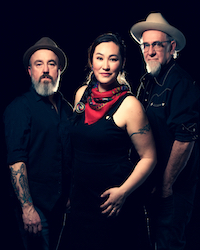 This show is part of the CAPITOL SEASON.

Diyet was born in a tent and spent her childhood on the ancestral lands of the Kluane First Nation people in Canada’s Yukon Territory. Coming from a family rooted in traditions but tempered with a good sense of adventurous hippie attitudes, Diyet has created a musical presence that is as diverse as her Southern Tutchone, Tlingit, Japanese and Scottish heritage.

She discovered her voice singing on the school bus, went on to acquire a degree in music, then became a published songwriter in Vancouver, BC. When the pull of the North was too strong, she packed her bags, and her Dutch husband, moving back to her village of 90 people without a plan or even a pub to play in. The result of this unlikely career move has been international collaborations, extensive touring, features in the New York Times, MacLean’s Magazine, and on BBC Radio (Messiah/Complex) .

During the last decade Diyet has performed nationally in Canada and internationally in Europe. Performance highlights include major folk, jazz, world and multi-disciplinary festivals and theatres in Canada, tour in the UK and upcoming tours in Germany & The Netherlands. TV appearances include; APTN Indigenous Day 2019 Live, CTV Atlantic Morning Show, CBC New Years Eve 2020 National Broadcast and Against the Grain Theatre’s Messiah/Complex.

Continuing to live with feet firmly planted in two worlds, Diyet’s adventurous and sometimes chaotic life is on full display in her music. She often says, “yesterday, fishing for our dinner on the ice, the next day, on the stage singing for you!”

“Diyet’s poetic lyrics are heartfelt and true, full of hope and inspiration for positive change in her community.”
– DISCourse

Watch a video of a live performance by Diyet and the Love Soldiers here.

COVID Protocols: Show dates, times, and conditions may be subject to change as mandated by Provincial Health Orders. At this time, masks are optional and proof of vaccination is not required. Ticket-holders will be informed by email of any changes to these protocols.