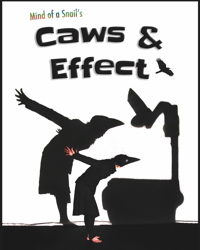 Crows are re­dreaming the world. Is the future all it’s cracked up to be?

Caws & Effect is a modern fable that explores the unexpected consequences that arise after a crow plants a magical seed. The story is told using handmade layered projections, puppetry, masks, and an original musical score. All aspects of the show are created and performed by two artists: Mind of a Snail’s Chloe Ziner & Jessica Gabriel. Their large­scale shadow puppetry is quirky and beautiful, like an early National Film Board animation performed live before your eyes.

“A gorgeous and wondrous work of art” – CBC

“Mesmerizing – the ingenuity and artistry on display is breathtaking.” – Winnipeg Free Press