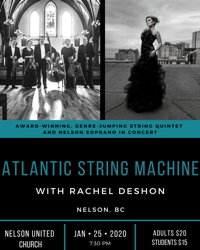 **This performance is at the Nelson United Church!**
Tickets purchased online/by phone will be available for pickup at the door at the United Church before the performance.

Based in Charlottetown, Atlantic String Machine has established itself at the forefront of new and exciting arts groups throughout the maritime provinces. Their unique approach comes from a desire to keep live music relevant, transformative, and above all entertaining. They seek out interesting collaborations with other artists, unexpected venues for concerts, and write their own arrangements and compositions, keeping their repertoire fresh and alive.

With a voice that has been called “undeniably fantastic”, Rachel DeShon was the winner of Marvin Hamlisch’s Search for a Star competition with the Seattle Symphony and a guest artist on his national tour. She was in the recent Broadway bound revival of The Secret Garden at the 5 th Avenue Theatre. In 2017, she released the exotica tribute album Taking Yma Sumac One Step Further with San Diego’s Creepxotica. She has performed with Joan Baez, Ann Wilson, Thelma Houston, Martha Davis, Norman Durkee, Lilianne Montevecchi, and Frank Ferrante and appeared as a guest artist with the Boston POPS!, Seattle Symphony, Pittsburgh Symphony, North Carolina Symphony, Teatro ZinZanni, Seattle Men’s Chorus, 5th Avenue Theatre, and at Singapore’s Esplanade Hall.

Local audiences will remember her from last spring as Donna in Black Productions’ Mamma Mia. Currently Rachel DeShon she is creating I AM: an opera, a solo performance for young people and their families funded by the Canada Council of the Arts.