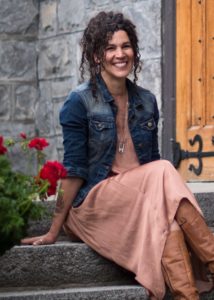 I attended the program when it was a Challenge Grant through the BC Government for post-secondary students so technically I was hired as a student for the summer of 1988.

In those days, there were three shows per summer through July and August. The students who were hired were cast in the shows and also served in technical roles. I played the role of Linda Barrie in “Love Is Strange”, did lighting for “Saltwater Moon” and built sets for “I’ll Be Back Before Midnight”.

I was studying music at university at the time and this was a chance to receive some further guidance and on-stage experience. Also, my boyfriend was doing it and I REALLY wanted to spend the summer with him!

Margaret Stacey. She was so involved and so passionate about the theatre and this program. The support I felt then and have always felt from Marg stands out as very special.

Theatre has a way of creating almost instant community. Even though the casts now are bigger than when I was involved as an actor, there is still the magic that happens by about day 2 when you realize that you have forged new bonds with people who a day before were unknown to you. Over the next few weeks, this bond is cultivated while working toward the common goal of creating a show during which youth discover the joy of encouraging others to shine while others are inspiring you to do the same.

8. You kept in touch with the theatre even after you left to attend post-secondary. What brought you back to Nelson and how did you end up teaching the program you had enjoyed in your youth?

The boyfriend that I didn’t want to be away from for the summer of ’88 was Don Macdonald, my husband. We kept in touch…
Don was actually hired as the music director for the summer of ’94. He was asked to return as music director in the summer of ’95. We had just had our first baby and lived in Vancouver but a position came up at Selkirk College that Don accepted and it became obvious that he needed the summer to prepare for his new job. I volunteered to take Don’s place as music director for the summer show. The way I heard it, Geoff Burns was told that the person hired to be music director was unable to do it but his wife was going to pinch hit! I am sure he was skeptical or at least didn’t know what to expect regarding my qualifications. Luckily, we hit it off instantly and to this day I have considered one of the luckiest things that has ever happened to me to be meeting, working with and learning from Geoff Burns. It is now 22 years later and I still learn from and laugh with Geoff every summer. We have decided that this year’s production is our last and it marks the end of a long and very joyous collaboration.

9. Why should alumni support the program either financially, as a mentor, a teacher or volunteer?

The skills that one learns through the arts are applicable to any life scenario. The actors learn how to collaborate, the importance of being reliable and trustworthy, how to negotiate fear, how to aim for a goal and then assess for oneself and as a team how successful it was and how to adjust for the next time so that you are closer to that goal, perseverance… the list goes on. This means that, although several actors/singers/dancers have gone on to careers in the arts and value this program as a crucial training ground, everyone benefits from the experience regardless of which direction their life path takes them. We as directors are incredibly proud of all of the accomplishments of the participants and know first-hand how this program can shape and support youth – I know this as a former cast member, a director and as now a parent of a past and a present participant.