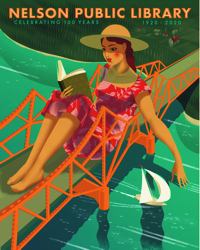 Two-time Stephen Leacock Medal for Humour award-winning novelist Terry Fallis, introduced by Leacock-award-winning Nelson author Jenny Craig. All 21 members of the Playmor Junction Big Band will offer a big brass accompaniment to the festivities, and will feature Juno Award-winner Dave Restivo on piano. Slava Doval’s DanceFusion youth companies will perform, Allison Girvan and the Lalin Choir will serenade you, and the multitalented Bessie Wapp will emcee. Indigenous elder Donna Wright will open the evening and, in a tradition enjoyed since the dawn of humanity, transport the audience with a story. There will also be a few surprises.
Terry Fallis is the author of seven national bestseller, all published by McClelland & Stewart—two of which have won the Stephen Leacock Medal for Humour. He’s also a big champion of libraries.

Jenny Craig’s first book Yes Sister, No Sister: a Leeds nurse in the 1950s, spent 17 weeks on the London Times bestseller list. Her novel Gone To Pot won the Stephen Leacock Medal for Humour in 2018.

The Playmor Junction Big Band is a community jazz band that has been performing for over 30 years.

David Restivo is one of Canada’s most respected and influential jazz artists, a 3-time winner of the National Jazz Awards’ Pianist of the Year Award and a Juno Award-winner.

Slava Doval’s DanceFusion Youth Performance Company offers an intoxicating blend of culture and movement. Slava, recognized as both an inspired teacher and accomplished performer, is one of Nelson’s Cultural Ambassadors.

Lalin consists of 24 voices under the direction of Allison Girvan, an educator and professional performer with ensembles that include musica intima, Elektra Women’s Choir, The Vancouver Chamber Choir, the CBC Vancouver Orchestra, and the Vancouver Symphony Orchestra.

Donna Wright is an Indigenous elder who has played a key role in School District 8’s Aboriginal Education Program. She has offered cultural openings for many events with her signature warmth.

Bessie Wapp is a seasoned performer of theatre and music who has appeared on stages throughout North America and Europe. Also one of Nelson’s Cultural Ambassadors, Bessie is both eloquent and funny—and she’s been coming to the Nelson Library since she was a toddler.