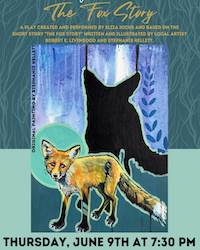 The Fox Story invites an intimate look at the thoughts and feelings of an ordinary woman as she struggles with grief, regret, and fear. She shares her visions, hope for the future, and recounts the recurring dream that holds elusive meaning and direction. The telling includes poetic language, visual imagery and stylist movement.

Performed and created by Eliza Hicks, this play is based on the short story The Fox Story written and illustrated by local artists Robert E. Livingood and Stephanie Kellet.

Eliza Hicks is an unknown actor. She trained and studied most of her life (Burlington Student Theatre, Sheridan College, University of Toronto) and enjoyed a short career back East (Hart House Theatre, Toronto Fridge, Toronto Summerworks, Tarragon Theatre, etc.) before moving to Nelson in 2006. After a hiatus from the stage, she has been spotted in a number of local productions. This is her first venture as creator/ writer.