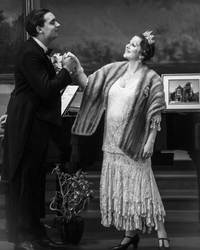 For more than half a century the name Florence Foster Jenkins has been guaranteed to produce explosions of derisive laughter. Not unreasonably so, as this wealthy society eccentric suffered under the delusion that she was a great coloratura soprano when she was in fact incapable of producing two consecutive notes in tune. Nevertheless, her annual recitals in the ballroom of the Ritz Carlton hotel brought her extraordinary fame. Her growing mob of fans packed her recitals, stuffing handkerchiefs in their mouths to stifle their laughter—which Mrs. Jenkins blissfully mistook for cheers. SOUVENIR, by turn hilarious and poignant, tells her story through the eyes of her accompanist, Cosmé McMoon. Eyewitness accounts of their concerts vary so wildly it is almost impossible now to separate fact from gossip. Hence this fictional “biography,” in which we follow the story of their partnership from its earliest days to their infamous concert in Carnegie Hall and its aftermath. A musical odd-couple for the ages.

Kozmo Sammartino- Cosmé McMoon – (He/Him) is a music-theatre performer and aspiring composer and is a favorite among Nelson’s local theatre community and he recently graduated from St. Clair College’s Music Theatre Performance program this last spring. He grew up playing classical piano from a young age, and fell in love with theatre and musicals in high school. He is passionate about classical music, and wants to create positive social change through music and storytelling. Sammartino aspires to work as an actor and develop new musicals in the Toronto area after graduating. Most recently he played the part of ‘Joseph Beausoleil’ in the Canadian musical, Pélagie. This fall he heads off to the Atlantic Technological University in Silgo, Ireland to complete his bachelor’s degree in Theatre.

Pat Henman – Director – is a 43-year veteran of Canadian theatre and music industry as an actor and singer (including, but not all, Neptune Theatre, Mermaid Theatre, the Globe Theatre, Theatre Newfoundland and Labrador, Yukon Arts Centre, Stephenville Festival, Palace Grand Theatre). Having made Nelson her home in 2000, she has been seen on stage in Three Penny Opera, Glass Menagerie, Sylvia, The Gin Game and Steel Magnolia’s. Her directing credits include The Melville Boys, Hedwig and the Angry Inch, Mamma Mia!, Liberation Days, and Cabaret. In February 2021 Pat’s first book and memoir, Beyond the Legal Limit, was published by Caitlin Press. A dramatic presentation with music adapted from her memoir will continue touring in the spring of 2022. Pat was recently named one of the Top 10 Alumni for 2021 at Dalhousie University.