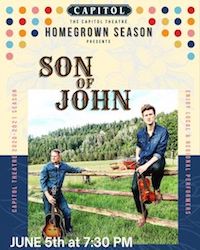 Tickets: $20
There is a 50-person capacity so we encourage you to BOOK EARLY!

Son of John is a country/roots duo from Castlegar, British Columbia and if you can’t tell, they’re father & son.

Johnny P. Johnson has been making music for over 25 years as a solo artist and front man. His son Javan Johnson, is a multi-instrumentalist and emerging country singer/songwriter. They’ve been playing music together for over a decade and in 2017, they decided to join forces and form the duo, Son of John.

Son of John doesn’t quite fit the mold – on purpose. Country runs deep in their veins, with Johnny actively farming each year on the Saskatchewan prairies where he was born and raised and Javan growing up on the river in the mountains on the family farm in rural BC. So, you can say Son of John doesn’t make “fake country songs’, with their rootsy instrumentations – fiddle, mandolin, banjos and dobros, – capturing an authentic acoustic sound. With or without their full band on stage, their live show can bring the two-step to the party, or they can croon with harmonies only the same DNA can create.

Son of John released their debut single Country Pure in June 2019, followed by a music video shortly after. It was named by Front Porch Music Blog as one of the Top 10 Country Songs of 2019, with the fiddle being described as “bad-ass” by the producer of the Country Pure video. Following their release, at the 2019 BC Country Music Awards, Javan was nominated for Fiddle/Mandolin Player of the year for the second year in a row, and Son of John scored their first BCCMA nomination for Traditional Country/Roots Artist of the Year after appearing at multiple venues across Western Canada including the iconic Dream Cafe in Penticton, BC and multiple slots at the 2019 Calgary Stampede. Son of John also received it’s first airplay across Saskatchewan on New Country stations, with Country Pure being played between Sam Hunt & Brad Paisley.

Named a semi-finalist in the 2019 International Songwriting Competition, their follow up single, Better Than That was released on May 1st 2020.

When We Are Broken: The Lake Elegy

Matchmaker on the Roof