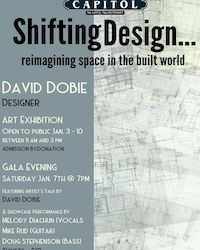 The Capitol Theatre is transformed into an art gallery!

Designer, David Dobie, has amassed his career’s work and created an art exhibition which will be open to the public daily from Jan. 3 – 10 between 11 am and 3pm. Admission is by donation.

The Gala Evening on Saturday, January 7th will include a time to wander through the exhibition, an artist’s talk, and a performance by Juno Award nominated vocalist, Melody Diachun; bassist, Doug Stephenson; and Juno Award winnng guitarist, Mike Rud.

David Dobie’s design career started in 1980 as a designer-builder in a small office in Nelson. His practice spanned the range of commercial buildings, retreat centres, restaurants, stores, and professional offices, but private residences were at the core of his practice until retirement in 2021.

This installation is not about the many hundreds of his built projects that grace this region. Rather, it is a celebration and acknowledgement of all of the hard work and inspiration that went into these projects. Not just hard work, but work with a high purpose, done with pen and pencil on paper.

Architectural drawing of this sort is a vanishing art. The design profession has embraced the (sometimes-illusory) promise of technology, and few people still draw by hand. In David’s practice, ideas emerge and are recorded in drawing, then are refined in a process where a new sheet of translucent paper is laid on the old, and the better ideas are brought to the fore to form the starting point for the new drawing. Layer after layer, trying new things, honing, refining, eliminating the extraneous, tightening the precision, conforming to the known qualities of materials, giving form to the ideas, and creating instructions for others to make them real.

Building is a collaborative act; there are many pitfalls on the road to getting a project built, many opportunities for the original intentions to be lost. The design sketches represent the purest essence of the project, the least compromise, the greatest potential for integrity and harmony.

Thus, the years passed and the drawings of each year accumulated, became substantial in their abundance, were absorbed into the body of work. Forty years, hundreds of homes and buildings, countless thousands of decisions, millions of lines.

Such architectural lines convey many meanings, and are part of a symbolic language that spans from dreams and the most subtle of gestures to the definitive solidity of stone, wood and steel. Lines represent surfaces, the boundaries of spaces, the edges of solids, openings for movement and light, structure, the earth.

This exhibition is an act of letting go, of letting the ideas that were brought to an acute focus and coherence on the drafting board and in the built projects dissolve back into the place they came from. Separated from the projects that they were created for and shifted, rotated or reversed, layered with other unrelated drawings, only their lines are recognizable, but as pure shapes, no longer visible as design ideas.

We are accustomed to thinking about architecture as buildings, as shelter or as art. This installation invites us to go behind the façade and encounter the visions, the false starts, the trial and error, the calculations, the intentions, the intricately rendered details that, given skill and care, might have ended up in someone’s house, but also might not. It is a celebration of process rather than product. It seeks to embody in physical form that which is ephemeral and insubstantial, but without which great buildings are not possible.