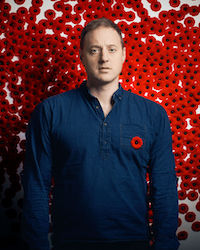 Often called the “battle that made Canada,” Vimy Ridge resulted in over 10,000 Canadian casualties. Through direct storytelling, verbatim theatre, and live music, Brendan McLeod examines misconceptions and varying perspectives around the battle, while drawing parallels to other formative events in our nation’s past. Featuring inventive musical interpretations of WWI soldier songs, Ridge probes difficult yet necessary questions about how and why we grieve. A vivid, kinetic ride through history, as well as an intimate, personal examination of our connection to the past, Ridge is a visceral work that passionately argues against the exploitation of young lives. Ridge premiered at the Chan Centre, in Vancouver in March, 2020.

Brendan McLeod is a writer, theatre artist, and musician. He’s the author of a novel, a poetry collection, five theatre shows, and is the founder of The Fugitives, a Juno-nominated folk group that tours internationally. A former Canadian SLAM poetry champ, he was the Poet of Honour at the 2012 Canadian Festival of Spoken Word. He’s taught spoken word at Langara College, and is an active arts educator, currently touring his shows “Brain” to secondary schools and “Holy Guacamole, It’s a Poetry Show!” to elementary schools.

The Fugitives are a Canadian Folk music group formed in 2004 in Vancouver. Trench Songs is The Fugitives fifth record. It was nominated for a JUNO and multiple Canadian Folk Music Awards. Their previous album, The Promise of Strangers was nominated for Canadian Folk and Western Canadian Music Awards, and won Best Folk Album of 2019 from the German Music Critic’s Association. Their previous album, Everything Will Happen, spent ten weeks on the top ten Canadian folk charts, and earned them a support slot across Western Canada with Buffy Sainte-Marie and an appearance at UK’s Glastonbury Festival.

COVID Protocols: Show dates, times, and conditions may be subject to change as mandated by Provincial Health Orders. At this time, masks are optional and proof of vaccination is not required.Ticket-holders will be informed by email of any changes to these health and safety measures.

Of Frost and Fire