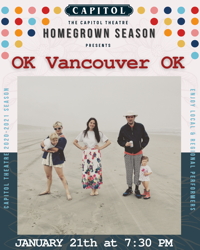 Tickets: $20
There is a 50-person capacity so we encourage you to BOOK EARLY!

ok vancouver ok intends to perform as a band including such instruments as electric guitar, electric bass, drums, and keyboards an amplified loud and quiet thought-provoking set. In addition the band will present new unreleased songs pertaining to pandemic isolation at home, and revoked tour possibilities for touring musicians.

The band have toured in Australia, Iceland, UK, Canada, USA numerous times, also in Scandinavia and Europe 7+ times over the last decade, and have a growing fan base across Europe. Many comparisons have been made over the bands 17 year existence, though the band is always adapting and free to be itself. The latest record, Black Part of Light (pre- pandemic) was released on Switzerland Label Bongo Joe. Also recent 7″ released on French label Six Tonnes de Chair.

The band merchandise will be available stocked with the latest records and older ones, also some other radical goodies!

Matchmaker on the Roof