Matchmaker on the Roof – STREAM 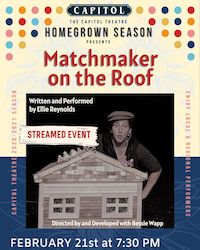 Matchmaker on the Roof – STREAM

Matchmaker on the Roof, a play written and performed by Ellie Reynolds, directed by and developed with Bessie Wapp

Matchmaker on the Roof is a distinctly Kootenay-flavored one-woman show, telling the true tale of Ellie’s outrageous, Border-Crossing love affair. Fleeing her London home, along with her family’s hopes for a respectable Post-Cambridge career, she travels to BC with two desires: to sink her hands into the dirt, and to make her travel buddy fall in love with her. He doesn’t. Landing in none other than the city of Nelson, Ellie’s disappointed heart chakra is ripped open on the spiritual dance floor – leading her directly into the embrace of a stranger who turns out to be a ‘most unusual Match’.

Singing her way through familiar melodies from Fiddler on the Roof, and guided invisibly by a wise and mischievous Matchmaker, Ellie boldly breaks away from, wrestles with, and ultimately rediscovers Tradition and celebrates her newfound Miracle of Miracles. This musical, multi-character, and comic memoir show delighted local audiences in its debut tour last year. Now it is making a triumphant return to Nelson for the Capitol Theatre’s Homegrown Season, accompanied live by Bessie Wapp on piano.

Supported by the Colombia Kootenay Cultural Alliance, Matchmaker on the Roof was written and developed in 2019 and enjoyed many sold out shows in the West and East Kootenays during its virgin tour. The show was also selected by the National Arts Centre’s #CanadaPerforms series in March 2020 and was broadcast live to an internet audience from Ellie’s living room via Facebook.