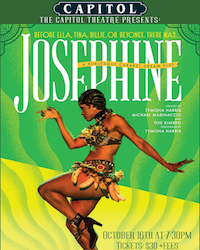 Tickets – $30 (plus fees)
STAY TUNED FOR OUR SEASON LAUNCH AT WHICH TIME TICKETS WILL BE AVAILABLE TO PURCHASE FOR THIS AND OUR OTHER SEASON SHOWS!

*This show is intended for adult audiences as it contains adult content and nudity.*

Before Ella, Tina, Billie or Beyonce there was Josephine…

Josephine is a biographical musical that combines cabaret, theatre and dance to tell the story of the iconic Josephine Baker, the first African-American international superstar and one of the most remarkable figures of the 20th Century. Josephine shatters stereotypes of race, gender roles and sexuality in this intimate, charming and haunting cabaret with a twist.

Josephine Baker was born in St. Louis in 1906 and achieved only moderate success in the United States, but became an international superstar after moving to Europe in 1924. She starred alongside white romantic leading men in films in the 30’s, had multiple interracial marriages and homosexual relationships, and performed in men’s clothing before the term “drag” was commonly used/known. She was a spy for the French Resistance in WWII, a civil rights activist, and mother to 12 adopted children. Her success often have her the opportunity to live free from the racial oppression of her home nation, though she never stopped yearning for acceptance in America.

This show stars Tymisha Harris who has been performing professionally for over 20 years. Her earliest credits include assistant choreographer and backup dancing for the ’90’s pop group N*SYNC, backup dancer for LFO, multiple roles at Universal Studios Orlando, and a featured role in the hit movie series, “Bring It On”. More recent endeavors include the national tour of “Rock of Ages”, a European tour with the innovative and world-renowned Pilobulus Dance Theaer Company, and a founding member and Assistant Director and Choreographer of the succesful Orlando based troupe, VarieTease.

“Probably the closest to an evening with Josephine Baker as one will ever experience.”
– Stagebiz NYC