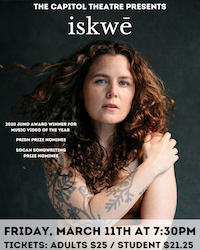 iskwē | ᐃᐢᑫᐧᐤ (short for waseskwan iskwew, meaning “blue sky woman”) is, among many other things, an artist – a creator and communicator of music and of movement, of pictures, poetry and prose. And through it all, she’s a teller of stories that have impacted our past and will inform our future.

The Stars is iskwē’s newest release (March 5, 2021). It is the inverse of her third album acākosīk starting with the title which is the English translation of the Cree word acākosīk. Where acākosīk is a blaze of sonic exploration, The Stars is an elegant and intimate sharing of the collection allowing iskwē’s songwriting, voice and spirit to shine. The Stars features entirely new arrangements of the six songs with iskwē accompanied by a trio of piano (Michael Shand), cello (Mariel Gonzalez), and violin (Laura C Bates) recorded live-off-the-floor at Revolution Recording in Toronto and a dramatic orchestral reimagining of “Night Danger (Lovers Mix)” recorded with the FILMharmonic Orchestra (Prague). Where acākosīk demanded our attention, The Stars invites us into an emotional and soulful experience with iskwē.

acākosīk, (November 9, 2019), is a sonic exploration that not only blurs lines between sources and styles, but also between the actual and the ideal, the real and imagined. But by extension, it’s also the star around which immersive worlds of live performance, video, and visual art revolve. acākosīk has received critical praise: the video for “Little Star” garnered a JUNO Award for Music Video of the Year in 2020, the album was nominated for a JUNO Award for Adult Alternative Album of the Year, and “Breaking Down” was nominated for a Prism Prize and the SOCAN Songwriting Prize.

The songs on acākosīk and The Stars are meant to raise awareness of systemic abuses and societal opinions and the way we’ve been perceived and treated, but also to celebrate our culture and help bridge that gap – to help us find empathy and common ground and connect the way we’re supposed to as people, regardless of race or religion or background,” she shares. “A lot of these issues, while they stem from my experiences and those of my people, are really universally human issues.”

iskwē’s album The Fight Within (2017) was JUNO-nominated for Indigenous Music Album of the Year (2018) and garnered her a spot on the Polaris Long List.

iskwē’s message is arguably most impactful when delivered from the stage, where it’s not uncommon for people to leave in entranced contemplation or even in tears. Music merges with dance, multimedia, and more in a completely engulfing and cathartic experience – one meant to bring people together and celebrate that which unites over that which divides.

She has performed hundreds of shows in Canada and internationally, including Canadian highlights at Ottawa’s Parliament Hill and a triumphant performance with Canada’s National Arts Centre Orchestra, in New York City at the Met and SummerStage in Central Park, and beyond for the King and Queen of Sweden, Reeperbahn in Germany, and Border Crossing’s Origins Festival in England. iskwē is an ambassador and program participant for the PRS Keychange initiative.

iskwē is Cree Métis from Treaty One Territory. She was born and raised in Winnipeg, Manitoba, Canada. She is an urban Indigenous two-spirited woman from the Red River Valley, the birthplace of the Métis Nation.

Want to dive deeper into iskwē’s story? You might find her Walrus Conversation (2018) interesting. In this piece entitled Remembrance, iskwē discusses how she “experienced the world very differently than her grandfather did, because she was not visibly Indigenous. Here’s what she learned through his stories of pride and cultural teachings.”

The Art of Chamber Music