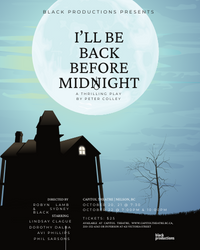 All tickets: $25 plus GST and fees

Black Productions is delighted to present Peter Colley’s thrilling play I’ll Be Back Before Midnight .

Jan (Lindsay Clague) has recently had a nervous breakdown, and her husband Greg (Avi Phillips), an archeologist, has rented an old farmhouse in the country where she can recover. When George (Phil Sarsons), the hilarious farmer they rent the house from, tells stories about a terrible murder that once took place in the farmhouse and the ghost that reputedly stalks the night, Jan’s imagination gets fired up.  The situation gets even worse when Laura (Dorothy Dalba), Greg’s beautiful but manipulative sister arrives.  Soon Jan finds herself tormented by strange sounds in the night, and visions of the vengeful ghost.  Is she having another breakdown?  Is someone trying to drive her mad?  When she tries to defend herself from this apparition, events take an unexpected turn in a night of unimaginable suspense.

**Please note that this is a high intensity show that countains loud noises, flashing lights and other potentially scary elements. Not recommended for children under the age of 13.