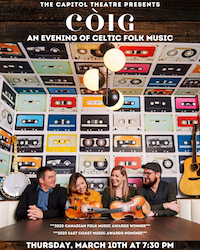 ***AS PER THE BC PUBLIC HEALTH ORDER, AT THE TIME OF THIS PERFORMANCE, TICKET HOLDERS MAY BE REQUIRED TO PRESENT PROOF OF BEING FULLY VACCINATED (7 DAYS AFTER 2ND DOSE) TO BE ADMITTED. ***
Currently, this requirement is in place only until January 31, 2022, but is subject to extension.
PHO also indicates that masks are mandatory in all indoor spaces and group indoor events are limited to 50 people. The Capitol will stay on top of this situation and update our patrons with new information as it arises.

Còig is one of Atlantic Canada’s most exciting Celtic traditional groups made up of accomplished multi-instrumentalists, Chrissy Crowley, Rachel Davis and Darren McMullen. With the fiery Celtic high-energy style as its musical core, Còig easily shifts between century-old tunes of past generations to original and upbeat compositions, featuring the band’s range of over a dozen instruments (vocals, fiddles, piano, guitars, banjo, mandolin, viola, bouzouki, whistles, and more). With driving tunes, haunting songs and infectious energy, Còig is an unparalleled music force.

Còig’s music is a unique combination of influences that could only come from these players.
“We all come from sort of a traditional background, but then we have different influences that we’re interested in,” explains fiddler and singer Rachel Davis. “Chrissy (Crowley, fiddler) likes to dive into a lot of world music, Darren (mandolin, guitar, banjo, etc.) comes from a kind of Irish theme from playing around a lot. More of the traditional Cape Breton stuff is really what I love, plus all the folk songs, so it’s an interesting mix.”

The Cape Breton quartet have earned rave reviews from audiences around the world and an impressive list of credits for their recordings, ”Rove” (2017), “Carols” (2015) and “Five” (2014) including a Canadian Folk Music Award, a JUNO Award nomination and multiple East Coast Music Awards and Music Nova Scotia Awards.

The best in trad music, in a non-traditional way. That’s Còig.