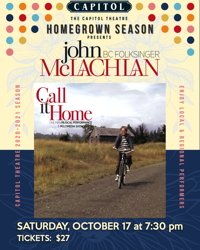 Tickets: $27
There is a 50-person capacity so we encourage you to BOOK EARLY!

We are very excited to present our HOMEGROWN SEASON!

John McLachlan’s Call It Home show is a one-man musical performance & multimedia show that re-ignites glowing memories of summer vacations, explores the pains of growing up, and sheds light on the realities of adulthood. The songs tell of youth, the passage of time, and the vibrancy of life on Hornby Island which John McLachlan now calls home. But, it’s about more than that…

From a poignant memory of his dad’s 8mm home movies to a story about the first car ferry and its captain, this concert is part nostalgia, part history, and part present day. Images and movie clips weave throughout, adding a richness and authenticity recognizable to every childhood summer holiday spent on islands, lakes or countryside. Call It Home traces a personal yet universal journey of appeal to all ages.

BC born singer/songwriter John McLachlan began writing and performing in folk clubs in Vancouver in 1979. Over the next 20 years he presented his original songs about his own experiences and historical events in hundreds of theatres, festivals, clubs and schools.

After a hiatus working in arts administration and graphic design, in 2014 John returned to music, writing and recording the album Call it Home in 2016 and Wind & Bones in 2017, Time Broke in 2018 as well as McLachlan Sings Lightfoot, a 14-song collection recorded live in the studio with multi-instrumentalist Marc Atkinson and bassist Scott White.

John’s inimitable stage presence, range of songs and genuine rapport delights and connects with audiences of all ages.

“John draws the universal from the personal and everyone in the audience reflects on their own ‘home’ as the songs, stories and exquisite images f low over you. Make a plan to see it!” – Bill Usher, Kicking Horse Culture, Golden, BC