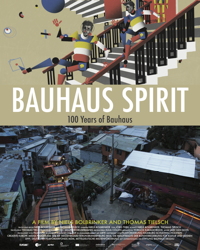 Celebrate the 100th anniversary of Walter Gropius’ Bauhaus with this lively and wide-ranging exploration of the movement uniting modern design, art, architecture and performing arts with communal social living to form an academic discipline and utopian way of life.

The most comprehensive film on its subject to date, Bauhaus Spirit explores this influential 20th-century movement’s history, legacy, and continued relevance in an age where function and environmental sustainability have taken on new urgency.

“On the occasion of the Bauhaus centennial, the film traces the history of the school from its Weimar era beginnings through its continued impact in architecture, design and sustainable living today. Celebrating the search for connections between architecture, design and society, this is a film about fantasy, utopia and thinking big.”
—Jens Balkenborg, EPD Film Magazine

“One hundred years ago, a radical artistic utopia was born: Bauhaus, one of our century’s most influential architectural schools,
still sets the pattern for the way we live. Young architects, school teachers, designers, sociologists reflect on their Bauhaus experience. The synthesis of free imagination and strict structure, enrichment and simplification, light and clarity transformed Bauhaus to a significant contribution to our lives on a cosmopolitan scale. The true measure of its influence isn’t only how familiar it has become but how it still shapes our society today.” —International Documentary Festival Amsterdam (IDFA)