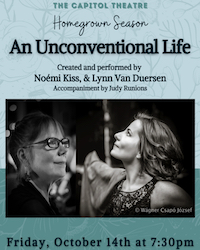 ***B.C. REQUIRES PROOF OF VACCINATION TO ATTEND ALL INDOOR EVENTS. AT THE TIME OF THIS PERFORMANCE, THE CAPITOL REQUIRES TICKET HOLDERS TO BE FULLY VACCINATED.***
By requiring full vaccination on this earlier date, the Capitol is permitted an increased audience, so the decision has been made to implement this prerequisite in advance of the Oct 24th provincial mandate.
We hold patrons’ well-being as paramount and will continue to apply a socially distanced seating map which includes vacant seats in front, behind, and to the sides of audience members to ensure their safety and comfort.
PHO also indicates that masks are mandatory in all indoor spaces.

“Dare to Dream.” This is a musical drama about a young Jewish woman who challenged the status quo. The creation of this show began when local soprano Noémi Kiss decided it was time to make her dream of singing all the songs from the movie Yentl come true. Noémi asked Kaslo thespian Lynn van Deursen if she could “write something theatrical” to showcase the songs as well as tell the story…

The piece examines gender inequality, what it means to challenge the status quo, and one young woman’s journey to find her way in a male dominated society without losing herself. Performed as if she is looking back on her life while speaking to a young graduating class, she tells her story, and sings about it as well.

The narrative is written by Lynn van Deursen, with songs by Michel Legrand (music) Alan & Marilyn Bergman (lyrics). The singer is Noémi Kiss, and the piano accompaniment is by John Dean.

Lynn van Deursen
Lynn has lived in Kaslo for 15 years, where she enjoys working at the health centre and volunteering at The Langham Cultural Centre. She trained in theatre at UVIC and was a founding member of The Vancouver Theatre Sports League. Locally she will be known for her performances in Appearances (actor), Harvest (actor), Becky’s New Car (director/actor), Front Door Women (script development/actor), Langham Memories (playwright/actor) and I, Claudia (actor), The Foursome (director) and her many years performing in Jim van Horn’s The Incomplete History of Country Music (singer).

Noémi Kiss
Noémi was born in Hungary where she studied voice and teacher training at the Liszt Academy of Music, and later at the Guildhall School of Music & Drama in London, England. Her early career flourished in Europe where she performed early music and opera, taught voice masterclasses and made a number of recordings in Hungary, Czeck Republic, Norway and England. Noémi moved to Canada in 2009 where she continues to perform with orchestras and a variety of ensembles. She works closely with the Nelson Choral Society, teaches singing, is a founding member of the vocal trio Ananta (Allison Girvan/Kathleen Neudorf) and is currently the conductor of Cottonwood Singers.

John Dean
John has recently returned to the Nelson area where he grew up studying classical piano and later graduated from the Selkirk College Music Program. For the past 30 years, he has be working as a professional musician perfroming and operating Soundwave Studio on the coast. John enjoys helping people reach their music goals by giving lessons, recording, co-writing and producing. Although he has been fortunate in making music in a wide variety of concert halls, stages, and cruise ships, John lists his biggest highlights as playing for Seniors in retirement homes because of the special connection in that environmnent. He feels blessed to have grown up in the Kootenay and is proud to call it home once again.